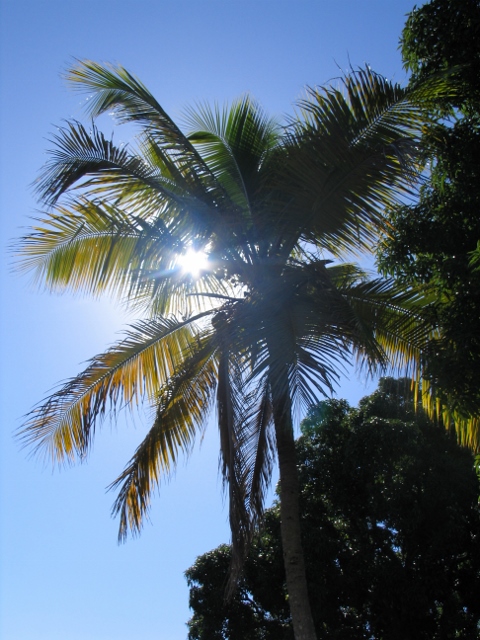 This is the picture I’ve chosen for the cover of my book. It’s the coconut tree above the well where I’d get my water when I was a missionary. The same tree I knelt under to propose to my wife and the spot we shared many  forbidden kisses. I started the book one  week after I was married so it’s been a project which has taken over six years. I’ve had a tremendous amount of help and I’m happy to report, it’s finished. For the next year I’ll be focused on entering it in literary contests to build up my credibility as an author. I imagine,  just like in any other professional endeavor, scouts are sent out by the big publishing companies looking for great up and coming authors.  As this is a new world for me, I’m seeking guidance and open to suggestions.

Life as a mission is a three part account of one man’s spiritual journey. Part one in this book is an introduction to the author’s life and his struggles with addiction. It shows how his life has been saved no less than four times. How his freedom from severe legal ramifications is kept intact on numerous occasions. He tries multiple times to gain separation from the things which hold him back, only to find himself desperate and on the fragile edge of suicide. It shows how God is unknowingly present the whole time. God ultimately leads him to the decision to give his life and will away. The author sells everything he owns and packs up his tools. Through a number of miracles, he’s able to travel thousands of miles away from his home in Canada, to begin a missionary adventure on the small island nation of Haiti.

Part two is the beginning of this adventure which sees the author living a missionary life for a year and a half. It demonstrates the learning curve and growth of this young man as a Christian. We witness his struggle adapting to the strict institutional setting. He gives an honest account of the joy and spiritual freedom he experiences as he assimilates into life as a Christian. He also openly shares the difficulty encountered when facing a strong front of spiritual warfare. The story of “Life as a Mission” is ultimately one of love. Love for God and for a young Haitian girl who he eventually marries. Although the love for his wife is forbidden by the institute, he persists. In doing so, he’s dishonorably discharged from his position of carpentry teacher and sent back home.

Part three describes his life on the other side of those walls. It begins with a brutal admission of errors made during his time as missionary. Knowing if he truly wants deliverance from his demons, he must be thorough in the search for self-awareness. Life Haitian style is not easy but it comes with many rewards. Immediately after getting married he sends his wife for a typhoid test and they find out she’s pregnant. They are unfortunately trapped on that island as a result of Canada’s unwillingness to let his wife and unborn son into the country. They face multiple rejected entry Visa attempts, a violently destructive hurricane and a barrage of physical and spiritual attacks. The author takes you along as he confronts his two scariest days. The first when he faces the loss of his unborn son and the next day, when his worry turns to the possible death of his labouring wife. The story ends with a dramatic account of the devastating earthquake which struck Haiti in 2010. We share his family’s journey as they sleep outside for one week, passing all obstacles on their way to freedom in Canada.

Life as a Mission consists of serious, and sometimes amusing, anecdotes from the author’s life. In his desire to give and share his fearless moral inventory, he gives an honest look into addiction and the captivation it can have on one’s spirit. This book is sprinkled with timeless wisdom and is full of enlightenment which undoubtedly comes from the Holy Spirit. The book proves that through God, all things truly are possible.

Look for the book in the new year, its a great one!